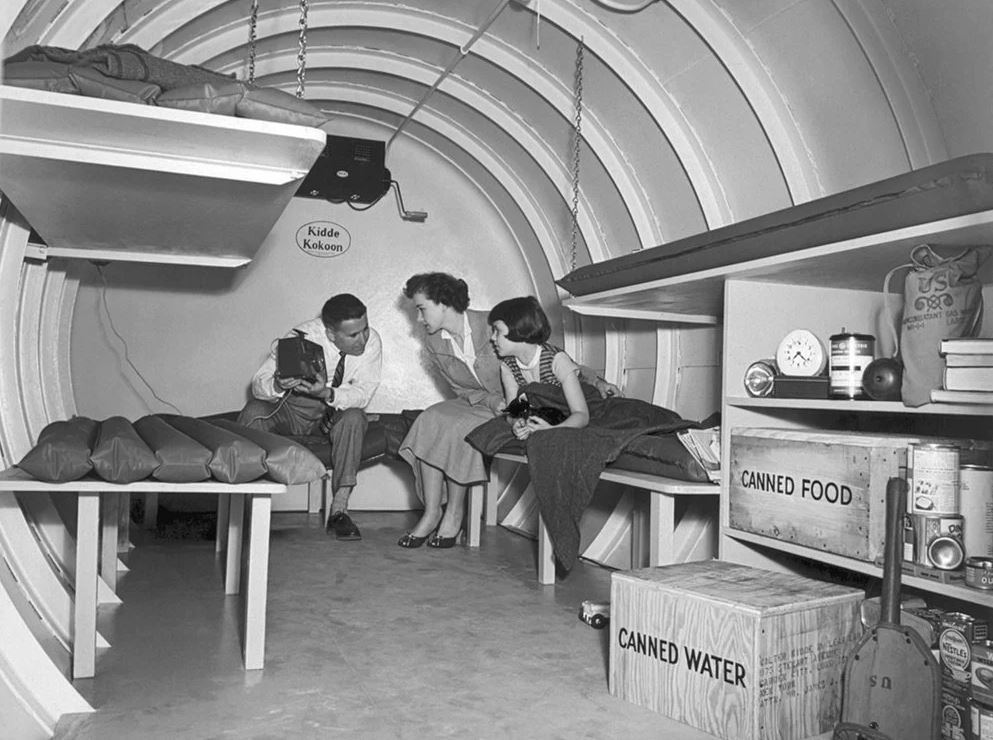 What is a Fallout Shelter?

A fallout shelter is a safe room or underground bunker built to withstand the radiation of a nuclear blast. As civil defense measures during the Cold War, many of these bunkers were built, so having to build one today should be part of your priorities because, based on recent world events, the possibility of a nuclear war is pending.

A fallout shelter is made to limit the amount of damaging fallout its inhabitants are exposed to until the radioactivity has degraded to a safe level.

In a nuclear disaster, you can seek refuge in a fallout shelter. It is crucial to plan your route to your shelter, the supplies you’ll need, and how you’ll survive once you get it.

Importance of having a personal/ family fallout shelter in our present world.

The world of today is very unpredictable. Nuclear weapons and missiles threaten our future, Russia and North Korea. Nobody is aware of what to expect tomorrow. Everyone who values their family should take action right away. It might be a purpose-built fallout shelter or a DIY root cellar conversion. These options increase the chances of survivalism during an “SHTF situation,” as preppers like to phrase it. The NBC (Nuclear Biological Chemical) air filtration system is essential for fallout/bomb shelter construction.

Given the rising hostilities between a lot of the world and Russia due to their invasion of Ukraine, this theory is formed. China’s relationships with its neighbors Taiwan and Hong Kong. China has been looming over the country for years and endangering its freedom. After noticing an increase in international violence, many nations feel intimidated by the hazardous situations other countries find themselves in and are fortifying their defenses.

Nuclear war is a serious risk that happens increasingly frequently. The tensions between the many nuclear-armed nations are high. In this world, a nuclear attack is always a possibility. In such a situation, having a fallout shelter is crucial to ensuring your safety and the survivalism of you and your family.

How to survive a Nuclear War

The market for nuclear missiles and bombs was worth $72.64 billion in 2020, and it is anticipated that it will increase to $126.34 billion by 2030, with a CAGR of 5.4% between 2021 and 2030. This prediction often states that the likelihood of a nuclear war starting is exceptionally high due to an increase in the rate of nuclear bomb and missile purchases.

So, in case a nuclear war was to start, here are some suggestions on how to survive:

Here are 10 tips on how to build a shelter in the event of a nuclear disaster.

1. Find a good location: The first step is to find a good location for your shelter. You want to find a spot away from potential radiation sources, such as power plants or nuclear facilities. You also want to choose a location that is easy to get to and has good access to resources like water and food.

2. Make sure it’s big enough: You need to make sure your shelter is big enough to accommodate everyone who will be using it. You should have enough space for everyone to lie down, and you should also have a separate area for a bathroom.

4. Use thick walls: Another way to protect yourself from radiation is to use thick walls, be it a root cellar conversion or a purpose-built shelter. The wider the walls, the more protection you will have. You can use concrete, bricks, or even sandbags to create thick walls.

5. Seal the shelter: Once the walls are built, you need to seal the shelter. This is important to keep out radiation and other contaminants. You can use duct tape or plastic sheeting to close the shelter.

There is a “Rule of Threes” of survivalism. These rules state that says you can stay alive for:

Apply the same principles when building your shelter.

Since we can only survive for three minutes without oxygen, you should prioritize installing an NBC (Nuclear Biological Chemical) air filtration system. We have a few options available at Castellex to ensure you retain access to clean, healthy air.

8. Have a way to purify water: Another essential item is a water purifier. This is important because you need to have clean water to drink. There are several different water purifiers on the market, or you can make your own as a prepper.

10. Plan to get out: The last thing you need to do is have a plan to get out. Once the fallout has settled, you need to be able to leave your shelter and find a safe place to go. You should have a map of the area and a plan for where you will go.

A fallout shelter, be it a root cellar conversion or a purpose-built protection, is always deemed as good as its air filtering system. You should consider Castellex Air550 as cost effective option for complete NBC air filtration system. It comes as a complete kit, where NBC unit, blast valve, blast protected overpressure valve, pipes, fittings, etc. are included.

For this reason, it is essential to equip your fallout shelter with a high-quality NBC air filter that will allow you to construct a positive pressure safe room, bomb shelter, fallout shelter, or negative pressure isolation room. Castellex NBC Air series filtration units, can remove not just most known warfare gases but also at least 99.99% of dust, pollen, mold, germs, and any airborne particles with a size of 0.3 microns (µm) from the air supplied to your fallout shelter.