Russian state TV has simulated nuking Europe in 200 seconds with ‘no survivors’. 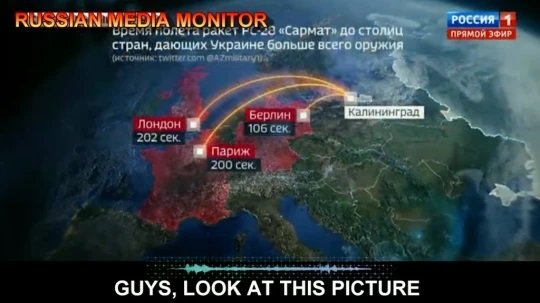 Britain’s nuclear annihilation demonstrated: there are several ways to do it, Kiselyov announces

Russian propaganda television programmes continue to actively discuss the possible nuclear destruction of Britain. Despite assurances from the Russian authorities that “we are not going to declare nuclear war on anyone”, the media in this country are actively discussing possible ways of destroying Britain.

In the last week, several reports or TV talk show characters have threatened to “wipe Britain off the face of the earth”. These are prime-time programmes hosted by the Kremlin’s most prominent propagandists.

In his original programme, Dmitry Kiselyov, who is also the CEO of the huge Russian state media corporation Rosija segodnia, told how the Sarmat strategic missile complex could destroy Britain.

On Vesti Nedeli, he was angry that “a country of relatively small islands is threatening a huge Russia”.

“Why threaten a nuclear-armed, landlocked Russia, sitting on what is essentially a small island. That island is so small that one RS-28 Sarmat would be enough to sink it once and for all,” he explained. Britain has previously responded to Russian threats to use nuclear weapons by saying that “we have nuclear weapons too, so Russia should not be threatening with destruction”. It was precisely the fact that the British were not frightened by Russia’s sabre-rattling with nuclear warheads that displeased the Kremlin’s propaganda chief.

According to the propagandist, “everything has been calculated” and he even quoted a Daily Mail article describing “a deadly new Russian weapon that could destroy the US state of Texas or England”.

“And that’s just one shot, Boris. And England is gone – once and for all. Why play games?” – Kiselyov asked rhetorically. Moreover, in his report, he also showed “another way to destroy Britain”: the Russian Poseidon unmanned underwater vehicle capable of carrying a nuclear device. If detonated off the coast of Britain, he said, it would flood the islands with “a 500-metre wave of radiation-laden water”.